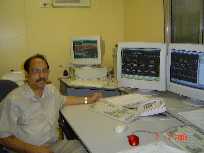 Completed graduation with Physics Hons in 1974.

Was awarded B. Tech degree in Radio Physics and Electronics in the year 1977.

During the period was involved in several important Railway Signaling and Telecommunication projects.

Specialized in the development and introduction of severalfail safe processor based equipments as Radio Block working, working of Axle counters on radio or optical fiber links from 1985 on Indian Railways.

Presently working from Austalia in signaling industry specializing in design of signaling systems and tools for Railway operations for projects in Australia as well as in other countries.

Engaged in developing online tools for the Railway Signaling System design and implementation.